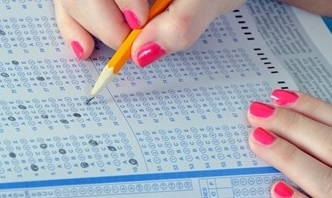 What is a Myers Briggs, or MBTI, Test?

Prepare yourself for the shortest crash course on pop-psychology. Imagine the people of the world to be divided into various permutations of four sets of rigid personality traits, or set of factors.

Introvert (I) vs Extrovert (E) – reserved vs outgoing

These traits combine to form 16 (4 X 4) personality types. So for instance, you may be an ISTJ – a quiet, practical, logical, and analytical sort – your buddy might be an ENFP – outgoing, creative, emotional, and an insightful bloke. And everyone can be classified as having one of the 16 personality types. Ergo, there are nearly half a billion people sharing Trump’s personality (Yikes), in this world! There are experts who claim that these personality types are rigid enough to stay with you for your entire life.

Somewhere in the 1940s, mother daughter duo, Isabel Briggs Myer and Katharine Briggs, came up with the instrument (MBTI) to enable such a classification – personality defining questions that rule out one trait in preference for another – after being inspired by Carl Jung’s Type theory. The MBTI test has since been used in corporations, schools, career counseling, leadership seminars, manager workshops, and by countless many eager to understand what personality club they belong to. In fact it is taken by over two million people each year.

Its years of testing dominance has often been challenged by research arguing the effectiveness, and accuracy, of such mass scale personality trademarks. In this article, we will explore whether these MBTI personality tests are backed by reliability. In other words, can you take such a test seriously enough to base important decisions, such as career choice, employee responsibilities, leadership roles, or even swearing an oath to a brotherhood among one of the 16 types?

MBTI, with its popularity, has a slew of tall names among expert supporters. But there are those that critique the usefulness of its wide scale use. Below is a broad scale overview of the plot holes analyzed by experts in the field.

You maybe hot one day and quite cold the next, and that childlike impetuousness may feature well in a Katy Perry song, but not in varying conclusions of a test that is supposed to determine your inherent personality type. Studies have shown that this test has a tendency to produce an output that may vary dramatically even within a span of a couple of months. If MBTI wants to be taken seriously, it really needs to be able to make its mind on which box to put you in – the shy introvert, with a penchant for deep analytical thoughts, the day you took the test while you were bit hard by a contemplative bug – or, the extrovert, and super charged emotional, self when you got the news of Kohli’s latest batting average. In other words, a hallmark of reliability is the ability to trust the consistency of the result. Absence of which would make even the bestselling MBTI a reflection of your mood rather than your personality.

Perhaps the underlying issue, with the test, is the this or that nature of preferential personality traits. If you outvote extrovert characteristics against the shier introvertish traits, you will have to be an extrovert, according to the test. Problem is that the theory behind it actually supports continuous traits, however, the natural tendency to be an amalgam of two polar virtues is not supported by the testing factors. In a critique of the measurement indicator, MBTI, experts have claimed that continuous scoring is not emphasized. What is purely a tool for research purposes, studying the fundamental traits using proper statistical weights and continuous scores, has been turned into a inefficiently regurgitated test for purposes it should have no place in – marriage counseling, career counseling and pretty much anywhere it is imagined to make a basis for differentiation.

Hard core statistical checks and balances involve a trick called factor analysis. In layman speak, it checks to see correlations between related and unrelated factors. As you might have already guessed, the analysis for related MBTI factors should yield a strong correlation, if it is to be considered reliable. So say you score as someone who is more practical, than driven by emotions, your response to ALL questions about your pragmatism should yield a similar score. And since the questions should dig out the four pairs of independent factors, a question on your shyness should not mess around with the scores of a question on your emotions. That is the four set of factors are mutually exclusive. And finally, the bunch of queries should be motivated to trigger responses feeding the factor dig rather than creating a big, and irrelevant, picture of the individual with no convincing trait. Studies, published in Educational and Psychological Measurement (Sipps, Freidt) and Journal of Personality (McCrae, Costa), have shown that factor analysis of the MBTI questions leave a large room for error. And for us mere mortals, it probably means that the error is big enough to fit a second individual, a camel, and a dog.

What it doesn’t consider

These tests don’t consider the bias associated with cultures, race, genders, etc. So if this test were to be used to find blind differences between two candidates, for a particular job, their background would play little role. It also doesn’t shed much light on how much of a trait is reigning over your self. Akin to the issue, mentioned above, it only creates a rigid segregation. And finally, there is no substantial foundation for its use to determine career affinities. It is possible that MBTI reveals a higher proportion of one of the 16 types in a profession, than another. However, studies have shown that much of that conclusion is not based on normalized data. That is, if ESTJ is more common in job function A, it doesn’t conclude much if it so happens that the general population itself is teeming with ESTJs.

Needless to say, this article doesn’t even begin to scratch the surface of the details of the research conducted to explore the validity of the tests. If you want further, more clarified, details, look into MBTI related counterarguments presented by Psychology professor, David Pittenger, Wharton professor, Adam Grant, and other sources. However, it does manage to question the unconditional faith bestowed upon a theory which is far more involved to be used so casually to establish a crystal ball nature of every possible application, from career compatibility to Speed dating.

If anything, it is a little warning to take the outcome, of the often trivially administered MBTI, with a grain of salt, pepper, paprika…oh well, an entire scrambled egg, if you will!

If you are looking to use this test for your team, or your organization, follow the research pros and cons of the same. And in the end, if it is only to break the ice on a Monday morning, go for it!