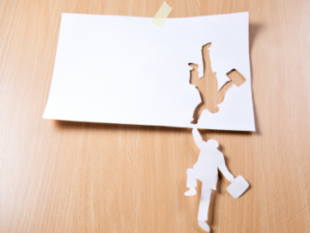 If you had a magic torch (well ‘coz no one uses oil lamps anymore really) and a genie appeared when you put the AA batteries in, what would your three wishes be? If you are not quite sure, here are some helpful suggestions.

1. Don’t ever ask for money. Inflation is going to make your boon look like chump change in a few years anyway.

2. Don’t ask for a smartphone, the new version next week will make yours obsolete.

3. Ask for property- a house that every Uber/Ola driver knows the direction to.

4. Lifetime of free unlimited nG internet, n being an integer greater than 4.

5. And finally don’t forget to ask for a fabulous job you can’t get fired from.

The possibility of getting sacked, or receiving the infamous pink slip, is a bane to fear in almost everyone’s career. The stress, the anxiety and above all the financial consequences of a forceful termination are really hard to bear. Unfortunate, as it is, it is a fact of reality that things may not always run smooth when it comes to your professional life. People often get terminated from their jobs, sometime after 30, 40 or even 50!

And it is a devastating experience. In the U.S. alone and in just the first month of 2016, nearly 75,000 layoffs were announced, according to a study by career placement company Challenger Gray & Christmas.

If your recent past has been marred by the HR calling you to say this is not working out, then you know what we are talking about.

You could be the cool dude who laughed it off by hitting your local bar with your buddies, trash talking your previous boss and venting the hate out of your system. You could also be the other dude who became depressed and started doubting his ability to ever get another job again.

Here’s where this article comes in. Imagine this is as the Oprah for confidenceless forcefully terminated employees everywhere.

How to get a new job after being laid off

Though it may feel like no other employer may be able to look past the sudden end of your employment, there are ways to get around the bad taste of layoff in your mouth.

So let’s see what all you can possibly do, if you have had a recent charring of your resume caused by a fire in your last job.

What do you think? This is not an issue of morality but certainly an issue of credibility. Much like any relationship, you don’t want to start by deceiving your new employer. You may choose to lie and say that you are still working for a company you were actually laid off from three weeks ago.

But if you are really really unlucky, your new manager may decide to contact your current manager for a reference. There you go, you are now the funny story that he will be sharing with others in the elevator. And no, you will NOT be getting the job.

But how to explain getting sacked from your last job?

Sometimes you could be the best employee, one month, and yet be shown the door, the next. These are strategies companies use to survive. Nasty as they are, they happen. You could have been the victim of a massive layoff like the one in TCS in 2015 and looking for a position in an IT company elsewhere. If your new hiring manager didn’t just come back from a trip from Mars, he should be aware of the recent goings-on in the business.

Then again, sometimes it is a more personal reason. However else you may like to believe it, your manager is human and is, like everyone else, prone to biases and dislikes.  Unfortunately, feelings may brew for a while and you may find yourself being slowly taken out of responsibilities, not letting you shine.  Your manager and you may realize that you can’t be civil to each other anymore. And before you could find a way to fix the problem, you may be asked to leave.

Whatever be the nature of the acrimony, it is not essential to get into the details, while applying to a new job. It should suffice to mention terminated in your resume and later mention something like we both had our problems that we tried to resolve, but couldn’t.

In other words don’t sound like a five year old pointing fingers at the friend who stole your cookie. Show that you recognize your shortcomings and would like to learn from them for any future assignments. Tell them all the good things you did and don’t sell yourself short.

Hide your boiling fury, towards your previous boss, under your cool composed exterior. If anything, you may sound like a future employee who is grounded with reality and will be working hard to not have his previous errors shadow him anymore.

Was it your fault that got you fired?

It may have been a mass reduction in work force, it may have been the unfortunate circumstance of being under the stink eye of your boss, or it could also have been possibly just you.

It is not entirely out of the realm of possibilities that you were an unproductive or inefficient employee who was proving to be too costly for your employer. Let’s face it, hiring a new employee and training her/him is a relatively tedious and expensive process. If they had to let you go because of your inability to produce good work, then it is probably a wake up call for you.

Maybe it is time you reconsider why you were shopping online from your office computer, calling in sick ever other day or making excuses to run errands during working hours.

Is this the career path you want to stick to or are you looking for a career change? If it is so then a termination is certainly a blessing in a big scary disguise. Read these (How to – Career Stories) for identifying your calling and making a fresh start.

If it was that particular office environment that made you procrastinate at work, then you are now better off knowing what working conditions suit you.

Any which way, you have a task to now convince your potential employer that you are not a repeat offender.

Time spent doing work, even volunteering, in the period of unemployment shows dedication towards a good cause. May work in increasing your social merits.

You can also use the time to get your hands on a professional training you had been putting off.

And finally, convince yourself and then your hiring manager that the previous job inconsistencies were only circumstantial. That you have realized your errors and perhaps he should give you a chance to show your newfound dedication. Don’t blame your work environment for your lack of productivity. Just own your mistake and learn from it.

And if you are still not convinced that being laid off is not the end of your career, here’s a shocker for you. Steve Jobs was fired from his own company. Instead of pining his loss, he created Pixar, your supplier of summer family movies, and a decade later he was hired back. He brought in Pixar and led the widely hugely massively successful business of iPod, iPad and iPhone.

So don’t despair and look forward to another chapter, more successful and more rewarding. Hey if the frustration gets to you, listen to this song. And whatever you do, don’t go store to store looking for a magic torch!