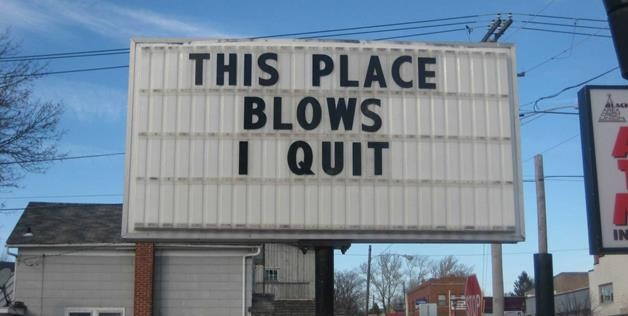 Dear boss, I am resigning from this job to pursue my dream of not having to work with you.

How many of you can really honestly say that you love what you do? Do you ever dream of the day you can march up to your boss and say, Stick a fork in me John, I am done!

Oh who are you kidding, there must be many. All you 8 to 9’ers who were promised decent working hours in their offer letters. All you weekend crunchers who have never used a single variety of leave- paid, sick, casual or formal (read this to see if you qualify to be called a corporate slave?). The day dreamers who wish they had opened their own coffee shop that could serve a real latte and not a coffee flavored milk shake.

In fact a 2013 study by the US Department of Labor Bureau of Labor Statistics (they need to have a more creative name) had a startling revelation. Nearly 74% of corporate employees were thinking and 32% were actively looking for other jobs. And a brave (maybe impulsive, who knows) whopping number of 2 million Americans were quitting their jobs every month!

Reasons ranged from unhappiness at work due to politics, favoritism, too much work, too little work, horrible bosses or for simply wanting to try out their own coffee shop (read about business ideas you can try out). But we are not here to discuss why but rather how to leave your job.

Before we get to it though, here’s the legen(wait for it)dary story.

People fantasize about ways to quit their jobs. If the experience is bad enough, some wish to leave with just a word of profanity or two, directed at the former boss, while a few do it with a difference. Such as one dude who brought a mariachi band to his former office and if that wasn’t fruity enough, he dressed himself up like a banana dancing to lively Mexican music.

No, no one’s suggesting you dress up like a banana, or something else, from the food group of your choice. Not unless you are wishing to be certified.

A resignation, believe it or not, is not just about handing over the letter to your boss and occasionally coming up with whacky ways to do so.

It is the end of a working relationship and deserves the same kind of attention and regard with which you part with any other. You don’t just write a Dear John letter, leave a Whatsapp message or just call in to break up with your office, over the phone. It is a process.

Tips to resign from your company professionally

Will they or won’t they

You’ve got an interview at what you believe to be your soul-job. You are excited. At least you were excited until a little worried voice in your head started spoiling the party.

But but my boss…he doesn’t know that I want to leave!

How do you apply to your new job while you are fearful of letting your previous one know?

Why fear? It all depends on your faith in the relationship with your current boss. Some may find it comfortable to discuss while some would rather eat chalk.

So, assuming talking to the boss is out of the window, you could be facing quite a difficult situation.

One being that you are fearful of getting fired if you announce your intention to apply elsewhere. Then the question really is do you have to let them know? Can you wait it out till you get a new job and then let your current boss know of your intentions?

Or, the second one. That you are worried that your new employer might need a reference and you are quite certain that your current boss is going to make you look like a potential felon. In such an unfortunate case you can try negotiating with your new employer to hire you on probation instead. Maybe see your performance and decide whether you are a keeper!

Give them time (i.e. notice period)

So you’ve got it. The new job! And you are excited to jump in right away. There is just this tinsy winsy thing you’ve to worry about still! Notice period.

Yes we understand. Nothing would make you happier than to just walk out this very minute. But then you have been employed here for some time, presumably with some responsibilities. And since companies don’t like redundancy in roles, you are probably the only guy who has access and knowledge of that software that helps your team keep track of, say, stationaries.

Now imagine the catastrophic situation you would be landing your former teammates in, if they suddenly run out of staples. Oh the horror! Unorganized loose sheets of paper everywhere!!

No one’s going to forgive you.

Now why would you want to sever relations on such a bad note? What if two years down you need to work with someone who happens to be in the same network as one of your former coworkers? Can you be absolutely sure that he/she would have gotten over the stapling trauma?

You get the point. You are smart. You don’t want to burn bridges and you certainly don’t want to leave any unresolved issues that may possibly come back and bite you later.

You have worked on fifteen official projects in the last year. Sometimes you’ve even put in extra hours on twenty unofficial ones. They have kept you busy.

It is always a good idea to organize your completed/ongoing work and document the process in neatly defined files. That way you will never get a panic call from your former boss, while in the middle of a meeting at your new job, looking for the final report on the third project you did eight months ago. Ughh!

In other words, replace yourself with well documented notes. You will never have to hear from them again!

Tips to write the resignation letter

While being quite subjective, there is still quite an agreement on how letters of resignation should be written. For pointers:

Signed, dated and delivered in an envelope, you will look like the most responsible employee they should have worked hard to not let go. Like maybe have offered a raise, a promotion, a yacht!

So make it look professional and whatever you do, never resign on a post-it!

Leave on a happy note

If you were well liked, chances are they will throw you a farewell party. If they don’t, you should still make sure you bid everyone goodbye and promise to keep in touch..who knows, you know?

It’s called diplomacy and it is a good trait to have if you generally want more connections than angry foes.

Walk out with a smile and a wave your hand to say goodbye. If it helps to feel good, just mumble

So long suckers!,under your breath. Cathartic as it maybe, for you, it may not be the most pleasant last thing that they want to hear, as you part.

Just start your new job on a good note and hope that you have found the perfect match.

Applications, interviews, resignations are all quite intimidating processes. What is also quite so is the process of adjusting well to a new work place- with a makeshift desk until they find you a cube, the new roles and responsibilities and not to mention the strange faces who you are yet to befriend.

Just play it cool and hope to make a good first impression.

So here’s to hoping that your first week ends with a pat on the back, from your new boss, and not with someone yelling Guess who dressed up like a banana!!