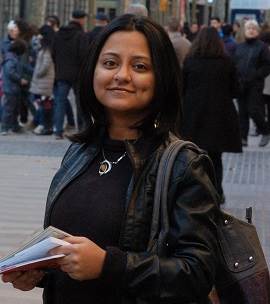 All, well nearly all, of us aspire to have a stable successful (not successive) career. Nearly all of us want to work in a famous corporation, a prestigious Institute, at a powerful position, in a respectable firm, getting things done and making a difference.

We all know it is hard but some do make it happen. Some of you do have such an established career. Some of you spend a large part of your life getting a respectable degree, and by Indian standards, I mean a BTech, MBA, PhD, MD, etc.

So some of you certainly have the ‘S’ ‘M’ ‘R’ ‘T’ smarts to make it far. A fancy title, an executive chair (you know the ones that bend along your spine) and, if you are lucky, an office with a view.

But there are probably some, among you, the seemingly successful, who have all but one thing. You are successful, but not happy. No, unlike popular belief, they don’t go hand in hand. You have mulled over whether what you are doing, though meaningful, is not rewarding for you anymore.

Every morning, instead of waking up to the music of birds chirping, you groggily shoo them away, cursing along. You don’t want another day, at a job, you loathe.

And if this describes your daily life then you are, my friend, in a bad situation. Of course, you didn’t need me to tell you that. Your friends and family might have already been grudging about your depressingly whining or scathing persona change.

Trust me, you can’t just take an MIB style neuralyzer and erase the memories of a bad day at work. It manages to creep into your personal life. ‘Hell Supreese’!

What, might you think, can you do to make it stop? Spitting in your boss’s lunch or calling in sick are just not, what you call, long term solutions. Well, is it better to just continue on in a loveless career or is it worthwhile to think of doing something you like? THIS, is not a simple question to answer. Allow me to elaborate.

Is it ever not about money?
No.

Financial aspect is the most obvious one for a career. Duh! Changing careers would obviously mean leaving your job and with that the paycheck. Having had a well paid job means you are living a certain lifestyle with a dependent or two. “I don’t like my job” is almost never a good enough reason to abandon it.

The first attempts will obviously be to find your niche in your own field. If academic research is slowly poisoning you, look for a teaching job. If teaching starts making you feel like you are about to bust a nerve, look for an industry job.

Meanwhile, you can start exploring options otherwise. Things are going to be busy and costly for a while, but happiness comes at a cost. Of course it does, or else I could have been so much happier with fifty-two new pairs of shoes every year, one for each week…

On a more serious note, if you have identified your passion, you are already halfway there. If you haven’t, keep digging in for your hidden latent talents and try out various courses, volunteer for free, look for mentors who can aid you in the right direction.

It will involve giving away a lot of your free time just so you can slowly start making your way to being a pro in what you like. It is a long long striving process and at the end of the day you may still not be making as much money as your job before, but, a desire to perform well in something you like, is a much stronger driving force than the fear of under-performing in something you abhor.

Now coming to the meat of this article, the shame and fear of a career change.

Our society is largely structured around a hierarchy of class. In this system where the lower echelons are either being pathetically ignored or being presumptuously patronized, the bourgeois middle class has concentrated all its efforts towards education and a successful career.

It is, after all, the ticket to comfort. It is easier now, more than it ever was, to afford higher education. There are more institutions to admit to and student loans to help you get there.

And with an increasing number of mainstream educational institutes, students have more opportunities to invest time and money in obtaining a higher degree leading to a successful career.

But let’s consider a scenario.  Anil belongs to a middle class family, keenly interested in art. Art, an impossible choice as career for most middle class Indians, is ignored due to its low potential at becoming a lucrative career. He is probably encouraged (a euphemism) to take up something more credible, say, becoming an Engineer.

Having more engineering institutes, than coffee shops, provides him with an express toll road to success.  He graduates, gets a job in the IT sector and years later he finds himself longing for something different. His job is stifling him and he feels a growing need to take up something more creative. He starts, gradually, looking into the possibility of venturing into a creative startup.

And just as well, let’s look at Madhuri. Madhuri has always been fascinated with science and loves helping people. She follows her dreams and becomes a research scientist. But over the years she realizes that she hasn’t been able to see the direct impact of her research, in helping people, and instead starts looking into scientific outreach to rural children.

But when Anil and Madhuri (couldn’t help it, was brought up in 90s Bollywood) convey their decisions to friends and folks, the reactions are similar.

But what about all the effort you put in your education? Wasted? And what if people think you failed at your job and got fired? How are you going to make money? Wouldn’t it be embarrassing to say you are an engineer who makes wall hangings for a living? Did you get a PhD to teach in some school in a village? Did you talk to dad about this?

The questions, more often than not, have little to do with financial strain of a career change. They seem to lean towards the insecurities, people have, with an image they need to project to the society at large.

Though more people, than ever before, are opening up to the possibilities in career, it is still a rarity. Unfortunately that insecurity sometimes gets projected onto the ones seeking something different and less glamorous.

There is a silver lining, however, as experience has qualified over and over again. It is impossible and more so pointless to think about pleasing everyone. So if there is something that keeps you away from screaming at birds every morning or snapping when someone asks “how was your day”, do think about it.

“It is never too late to be what you might have been.”(~George Eliot). So why not give it a try. For every five people you disappoint, there will be at least one who will appreciate it…you.

And as for what was the point of the degree?

The end goal of education is about providing an individual the means of thinking and understanding, and the social responsibility of contributing back to society. And an individual certainly has the right to decide how to translate her learning to something gainful, practically and emotionally.

Since somehow everything that comes down trickling from Ivy Leagues sound more credible, The Progress Principle study by Harvard Business School, concluded that productivity and efficiency are directly related to an employee’s happiness at work. So, isn’t it safe to assume that the best use, of one’s education, is in eventually doing something that they are happy about?

History is also filled with people who left their seemingly cushy jobs to pursue something they liked. Sukhwinder Singh Cassidy gave up her post as president of Asia Pacific and Latin America at Google to start her entrepreneurial venture Joyous, an online shopping network. Nagesh Kukunoor left his job as an environmental consultant in US, to become a filmmaker.  The euphoric singer Palash Sen left his career in medicine.

The famous list can go on but there are the not-so-famous stories too like. Like that of my dear friend, the Zumba instructor and Corporate Fitness Manager, formerly a bio-technologist. Or a theoretical physicist, who teaches how to make cheese…

At the end of the day, a career change is never easy, is almost painful and not instantaneously rewarding. It is possible that it may never be as successful. Failure and Nay say’ers might just keep trailing you but if you have made up your mind to try the new anyway, always keep the sound of why resounding in your mind to drown out the sounds of I told you so.

10 thoughts on “The shame and fear of a Career Change”