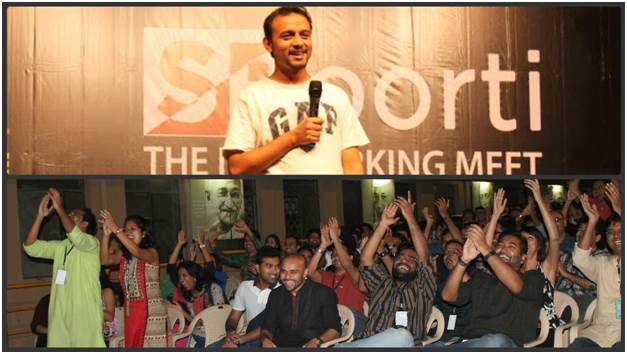 After watching some MBA grads giving presentations, you may start thinking that the breed is naturally inclined for a career in standup comedy. But it takes special talent to understand and harness the power of being intentionally funny and getting your audience to laugh with you (rather than at you).

For Ankur Nigam, an accidental exposure to the field soon grew into a serious obsession. Since then he has been working hard on sharpening his funny bone and using it as a weapon at will.

In this article, Ankur shares tips and advice on how to become a standup comedian in India without waiting for a traumatic life event (such as an MBA) to trigger the catharsis.

Career in Standup Comedy in India

Until a few years ago Career and Standup comedy in a sentence together would only come up as an example of Oxymoron. But gladly times have changed. People have become more audacious, informed, and most importantly accepting.

No one would disagree that Standup Comedy was around the corner making its presence felt but had never taken the center stage from the classics like a Concerts or Band performances.

I remember when I performed in an alumni function of a major business school in India, the showstopper was a band. It took sometime for the things to get settled and people to appreciate the element of standup and so much so that in the next major function my performance was kept for the last as a ‘big fat surprise’ for the audience to cherish like desserts.

I don’t mean to compare with the band. I think the talented guys perform remarkably well every time they hit the stage. But I want to highlight the slow change that has happened in the mindset of people where they are taking Standup Comedy seriously (pun intended).

My performance as a standup comedy was an accidental affair (gone wrong). During my MBA at SPJIMR, Mumbai, I was representing my college at XLRI, Jamshedpur for a skit performance, amongst many other events.

One of the teams participating in a fashion show approached me to buy some time for them. I was nothing but a filler but that opportunity excited me. I had been a stage guy for skits and plays since graduation, but never (even thought of) a standup.

I took the challenge, wrote a script overnight and since the content was not very strong I convinced a hot girl to be a part of it to help catch attention.

This was a time when AIB’s roasting episode had just made headlines all over. My thought process was tainted and by the end of my script i had roasted the hosting college itself.

Result : The audience booed me away from the stage.

Failures are hard to digest especially when they hurt your pride. There was nothing that could make up for it that night except for the realisation that i enjoyed doing it.

I knew I had made mistakes but I needed to learn from them. My next performance (which I did back in my college) was better in terms of content and also consent.

After that there was no looking back. Since I started as a student I always had this amazing advantage of having the audience ready for any show. And once my content improved and the word spread, I only had to concentrate on delivery and audience interaction; the applauds followed invariably.

Standup in India is in its growing phase – the part of the Product Development Life Cycle where future is rosy but the present is demanding. It is far away from hitting the peak and by then will not only nurture but also require a great deal of talent from amongst all.

Like any stock broker would advise you, this is the time to ‘Buy’ its stock and rise up the ladder. Once the curve hits a plateau, the supply demand ratio might get skewed against the favour of a new entry.

Humour is eternal. Pain is inevitable.

Most standup artistes agree that Indian Comedy is a changing and rising curve. The new forms of humour have overtaken the age-old ones like slapstick comedy and mimicry. A new era has set in.

People want novelty and content that cuts the clutter. Humour is now an art. What everyone sees but very few observe.

What type of humour will suit me?

There are primarily 4 types of acts that are most popular in the country.

One is the classic standup where one comes in and takes a jibe at the topics of his interest. Case in point – Vir Das and Papa CJ who are one of the most respected in this domain.

Next is Sketches which are funny adaptations of situations that happen every day – may be a restaurant scene, or a local bus travel, or even an office conversation. TVF (The Viral Fever) specialises in this kind of humor and gives it a social edge by making small youtube videos of it (remember the Chai-Sutta Chronicles).

Third is Roasting – the art of humiliating someone which leads to laughs for a larger majority. It became (in)famous after AIB’s roasting of Ranveer Singh and Arjun Kapoor which drew flak from the intolerant community and support from the rest.

Final one is Improv (short for improvisation) which people consider as the most difficult one too. People in the audience give you topic and you act on it instantly.

Which of these will suit you is something you can decide on your demeanour and comfort.

Spontaneous Humor is the key to performing improv. Similarly knowing the art of dissecting someone to pieces is required for Roasting. The classic standup demands a lot of observation skills and giving even the mundane not so happening things a humorous flavour.

To be a standup you should have two basic qualifications – sense of humor and no stage fear.

The rest – content, pauses, improvising, judging the audience – will fall in place as you practice.

Challenges for a Standup Act

I see two major challenges for any performing artist. External and Internal.

The former is about knowing your audience – what will connect with them and what might irk them off. Are they sensitive to certain topics or language that you should rather avoid. I remember I once used the “F” word in a performance in college and next day I was summoned to the Dean’s office.

The Internal challenge is a phenomenon called ‘Anxiety of Influence’. In this internet age where everyone is a creative, a lot of content gets passed through our brains, thanks to Whatsapp, Twitter, Facebook, Youtube, etc. This leads to registering of the content in our sub conscious mind.

And while we do not get to know, but this gets reflected when people write supposedly original content which in fact is inadvertently ‘inspired’ from some previous online content. One can overcome this by asking some third (preferably informed) person to go through the content. Cross verification helps even in eliminating redundant ideas.

Talk to your audience in their language. What is it that they are concerned about? If it’s a college you are performing in then talk about the humour in academics, faculty and subjects.

If it’s a corporate show, talk about how bosses ruin the lives or the pains of the systems or better even HR.

The challenge is in addressing a mixed, unknown profile crowd. But it comes with its own advantage – that you can talk anything – Politics, Bollywood, Headlines, Sports etc and (until its very derogatory) people will accept it as long as it arouses laughter.

How do I Start?

Open Mics are the best platform as a first step for anyone who is interested in taking up a career in Standup Comedy.

One needs to prepare content for 4 to 5 minutes and is judged by an independent audio meter that records the decibels of laughter and applauds on your jokes. It helps one give a good assessment of where does one need to improve and whether this is something (s)he can sustain enjoying.

The audience is a mixed variety who are craving for new humour and most importantly very supportive. So even if things fall flat they won’t make you feel terrible about it. The caveat is that such open mics have paid entry even for the participants.

So if you want to perform you have to pay a fee (usually around Rs. 200 to Rs. 300). Interestingly the audience ticket is cheaper than what you pay.

Another avenue to get started is Social Media. Of late it has given tremendous boost to the way anyone can reach anyone on the planet. The advent of youtube and facebook can give you a tremendous edge over the others who are still planning how to take things forward.

Pretentious Movie Reviews of Kanan Gill and Biswa Kalyan Rath, On Air with AIB, Pitchers by TVF, Ghanta Awards by East India Comedy are all stellar examples of perfect use of Social Media channels to promote the humour brand.

What if the markets sour?

Many a times when the comedians hit the ceiling, they use the weapon “What if”. What if the world was flat, what if the office timings were at night, what if coffee tasted like fizz drinks…and so on. Similarly, there’s no harm in thinking what if the predictions go wrong and standup doesn’t get to the Indian souls anymore.

Well think Auxillary then like its offshoots – advertising, content writing, social media influencers. There is a lot to consume you in, provided the talent, perseverance and hardwork do not go out of the picture.

And imagine the worst case where you are unable to sell your ‘wit’ then India’s WIT is always there to your rescue. WIT = Wipro Infosys TCS. The giant IT infrastructure in the country has been placed for a reason. You can join the mainstream back.

The adage goes that you cannot discover new oceans till you lose the sight of the shore. That remains a universal truth till date. And if one is interested to reach the “magical island” where others have made a mark – Tanmay Bhatt, Kanan Gill, Arunabh Kumar, Biswa, nourish the Humour Being inside you.

26 thoughts on “Standup Comedy Careers in India | Tips and Advice”