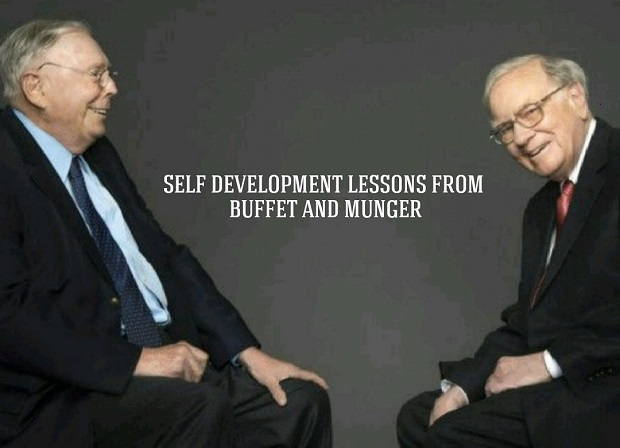 Imagine sitting alone in a café, contemplating your next career move or may be a transition from student to professional life. Irrelevant of how competitive or talented you may be, finding a true purpose in life will always be a treacherous journey. However, every opportunity, a failure or a success, will teach you an important lesson. We as humans fail not at exploiting opportunities but at learning from them. The lessons you learn from the people you surround yourself, from the failures you introspect about and from the actions you regret, together will help you develop your own life path. Isn’t it exciting? It is.

I have followed many leaders and their wisdom to develop a mindset that allows me to contemplate on my shortcomings and keep developing. Still, I do flounder in many aspects of life. Many!

In situations of uncertainty, I always imagine myself having a dialogue with people that inspire me. In one such conversation, I happen to meet Warren Buffet and Charlie Munger. The former is the greatest investor in the world and the latter is one of the most influential thinkers; his cogent wisdom labeled by his followers as ‘Mungerism’. Together Buffet and Munger lead the charge of Berkshire Hathaway – one of the largest conglomerates in the world.

9 Self-Development lessons from Buffet and Munger

Any successful leader in the world would agree on the importance of Focus. Yes, it is a clichéd self-help topic but have you actually overcome your social-media distractions to focus on important agendas? That is where we flounder.

Bill Gates and Warren Buffet confessed in a game to Gates Sr. that focus was the key to their success. Moreover, Munger emphasizes the importance of focus coupled with the investigations by a curious mind. Together they make a genius human such as Einstein.

Prioritize daily tasks; get into deep work mode and focus. That is how you tip the productivity scale. Cal Newport, author of ‘Deep work’, would agree.

To not get distracted, limit your daily work. For with no agenda, the monkey mind has no clear direction and it prefers to jump.

The 5-20 rule of Buffet is really effective in helping you prioritize your career goals. Buffet recommends listing the 20 things you wish to accomplish in life and select 5 that are priority. What you do now? Buffet suggests give your 100% to those 5 goals and forget the 15 others until the 5 are accomplished.

Isn’t that an efficient way? It is because now you give a clear direction to your mind and you commit your time to reach a pre-planned destination.

Many moons ago, Seneca, the stoic philosopher, stressed on the fact that humans should ‘Guard their time’. Time is the most important aspect of Buddhism and Stoicism, each preaches to not only live in the moment but also to take action. To evolve each day, Buffet and Munger agree, you must read and widen your thinking. Be it a blog, a small article, fiction or biographies, the eyes should read and the mind should think. It is an essential exercise. Together Seneca, Buffet and Munger advice you to use your time towards self development and detach yourself from the external conflicts and distractions of the world.

Little by Little, you will build your castle.

Buffet is a strong advocate of Compounding. He correlates the importance of small decisions everyday with the story of a King and a peasant.

Once upon a time (it is a fable so a clichéd start) there lived a King who announced that he would give anything to a person who defeated him in a game of chess. A peasant, who accepted the challenge, defeated the King. The King fearing that the peasant would ask for the princess or the wealth of Kingdom, hesitantly asked peasant, ‘What do you want?’

The peasant demanded, to everyone’s surprise, that a grain of rice be placed in the first square box of the chess and then it be doubled in each subsequent box.

The King thought this was an easy demand to fulfill but as the chess boxes started to fill, other peasants came forward to inform the King that rice grains of the Kingdom were over and still there were boxes on the chess board to be filled.

This fable beautifully depicts the results of compounding. A small initial investment in self which is doubled each day could lead to unimaginable positive results. Have you started investing in yourself?

An important mental model popularized by Charlie Munger. Buffet and Munger believe in defining a circle of competence – the sweet spots in which you can hit home runs. In professional life, this could be your skill set and expertise that you can leverage to find relevant jobs, network with necessary people or invest in businesses which align with your forte.

On the other hand, in self development, this rule can be extrapolated to moderate your emotions. Understanding which emotions you can master and which would distract you can help you moderate your response to external circumstances or conflicts. Interestingly, one can supplement this with the Buddhist principle of moderation.

The trick in investing is just to sit there and watch pitch after pitch go by and wait for the one right in your sweet spot. And if people are yelling, ‘Swing, you bum! ‘ ignore them.

Have you defined your Circle of Competence? If not, start the process immediately. Compounding can help here! Use your time in developing a skill and applying it in practical scenarios each day. Guard your time!

Munger is a huge fan of Ben Franklin and Albert Einstein. Franklin was a self-disciplined man, meticulously planning his day and sticking to it. Einstein, on the other hand, was a curious being, incessantly obsessed with the secrets of Universe and a brazen scientist, who challenged the foundation of physics. He used his thought experiments to completely engage in equations that define our Universal laws.

What can we infer here? Franklin and Einstein picked up on habits that aligned them with their passions and goals. There is nothing super human about their routine yet they went on to become extra-ordinary minds among us sapiens, changing the status-quo along the way.

How to develop them? One step at a time comrade! Have you decided on your 5 goals already? May be to learn a new technical skill? Plan for a certification course? Higher studies maybe? Plan a Job switch? Or maybe entrepreneurship? Now think of habits that you need each day to move towards them. Commit to one habit, give it time and then move on to the next. Slowly a routine is set and then compound effect gives you the results. A patient mind wins!

Intelligent people are generally loners because they are selective of their friends. Well, it does sound selfish yet it is good for the society. For innovations depend on creativity and intuition, and in turn, these characteristics thrive on solitude. Do intelligent people sacrifice social life? That is a personal decision.

Buffet always put an emphasis on committing to friendships that add value to your ‘Circle of Competence’ – that help your growth.

You want to associate with people who are the kind of person you’d like to be.

Interesting Fact: Bill Gates wasn’t very keen to meet Buffet initially for their fields were different and Gates didn’t see any value add in his friendship with Buffet. But one day, He and Melinda meet Buffet and from there they connect for a lifetime of friendship. Yes, Cola and bridge game are part of their weekends.

Be passionate but also be humble. Give back to society when you’ve done well; your net worth is irrelevant. Be empathetic as well as be decisive. Buffet was inspired by his father who lived in the moment, never cared about the money and had a strong value system; A good human in Buffet’s regard.

Subsequently, he venerated his late wife Susan Buffet who, unlike Buffet initially, took initiatives to give back to society once Buffet was rich and successful. Today, Buffet along with Gates and Zuckerberg has started the Giving Pledge movement.

9. Learn from Mentors and grow beyond

Munger once quoted on Buffet that

To look further you need to climb the shoulder of a giant.

Buffet chose Columbia University to learn Value Investing from Ben Graham. Today Buffet has surpassed Ben Graham in understanding the market. Munger believes someday somebody else would cross Buffet and him. One needs to put in the hard work and mind to what one needs to accomplish.

How are you going to choose a Mentor? In reality, many team leads, managers, top officials are generally swamped with decisions that mentoring someone is a cost they cannot pay. Deadlocked in office politics, if any, one never thinks to look for a mentor.

A student has the advantage to choose a professor but as a working professional, one needs to really commit to finding the right mentor by aggressively networking and cogently pitching your ideas and goals. Seek wisdom from different sources and then put your independent thought to sketch your plan of action. The game is on!

In summary, Buffet and Munger believed in dealing with reality with individual thought process in action and self-discipline. A curious mind applied to our routine and habits help us understand where we flounder and rules, listed above, assist us in compounding our daily accomplishments to reach our final goal.

So, do you have it in you to discipline your own mind and body?

About Prateek Shukla
A story teller with strong inclination in Finance, Tech and Entrepreneurship, writing to connect realistic career plans with philosophy.

4 thoughts on “Self Development lessons from Buffet and Munger”