There used to be a time, not too long ago, when being social meant having people over for tea. Photo albums used to be brought out on the rare occasions of family gatherings. Real News were a dinner time Tv show, filmy songs listened to over Friday Chitrahaar, games played on the rickety Carrom board, and falling out of friendship generally used to be way more melodramatic than unfriending with the slight touch of a button.

Somewhere in the last fifteen years, we managed to go from that, relatively unremarkable existence, to a full on broadcasted life over one of Twitter, Facebook, Instagram or some other social media networking site. If Facebook were a country, it would be the most populated country in the world, with over 1.8 billion users!

So clearly social media has become a part of our daily life, and for some it is daily life. Every minute, over half a million comments and nearly 300,000 statuses are updated on Facebook (Zephoria). You had a good breakfast, had a great vacation, or filed your nails – boom goes the image on FB.

But what happens when you go to work? Does the social in you simply die? According to a survey, conducted by Harris Poll for CareerBuilder, besides yapping on the phone and gossiping, internet surfing and social media account for 39 and 38% productivity losses, each. But that has not stopped 29% of Americans from using Facebook each day, at work, according to Statista. So yes, the increasing participation of users are a concern for many employers. 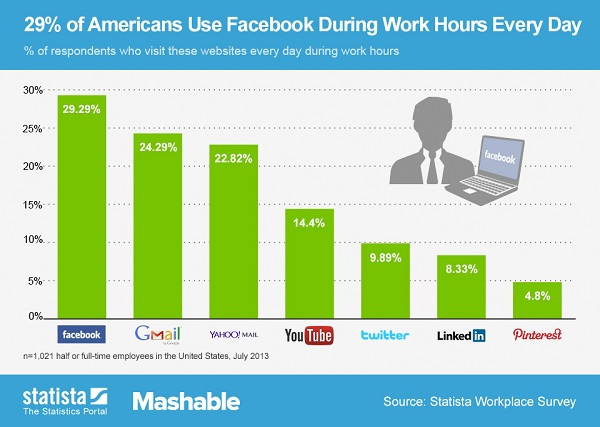 Why do companies usually disapprove of social media use at work?

The reasons for the concerns are not just about the loss of productivity. So what if the employees spend nearly two hours each day on Facebook? They can always be made to stay back for five more!!

There are other reasons that make companies nervous.

So what do Employers do to keep Social Media away from Employees?

That would technically be a dumb question thanks to all the smart phones. While they can monitor company devices and watch how long you are spending Facebooking, there are privacy issues when it comes to snooping around your personal device. They can’t ban social media on your private android. But to create a general level of discouragement, companies employ the following strategies, according to a study by Proskauer Rose LLP.

When do Organizations use Social Media?

It is not like companies always share an avoid at all cost relation with social media, like you share with some of your annoying relatives. A lot of companies are opening up to wide marketing channels through social media networking. Not only can social media act as a conduit for selling services and products, it is also now a major means of advertizing through content marketing. It is relatively easy to identify target audiences and use these networking sites to reach out to them. Some companies also use social networking sites to get direct feedback from customers.

Besides these, companies have been known to take action against their staff in case of inappropriate Facebook posts. Take the example of an intern at the Anglo Irish Bank taking time off for family emergency and then posting a picture of himself at a Halloween party. He got fired when his manager spotted his post. Yeah, like that was surprising!

It is not unusual for hiring managers to browse through your online posts in a blind hunt for inappropriateness. To be fair, sometimes these social networking sites actually benefit applicants in getting noticed for job openings! (Read Role of Social Media in Hiring)

There are no legal standing against it as, well, it is your post that you made public to begin with. Although a lot of countries maintain a code of conduct about such prying. In the United States, no status or comment falling under the NRLA can be held against a job applicant or an existing employee. In Netherlands, interviewers, if faced with a compromising information about the job candidate, are supposed to inquire about the circumstances which led to such a post. Just so the material is not taken out of context. Who knows? Your account could be hacked for all you know! That’s the least a company could, and should, do to keep the fine, slowly disappearing, line between your personal and professional lives.

In conclusion, companies know you don’t exist in a professional bubble. And for the same, you need to keep your guard on no matter what the policies or legal standings dictate. The legal system is still catching on to the rapidly changing world. And while businesses are struggling to reach a balance between the benefits and curse of social media in its environment, employees are tiptoeing their way to the bathroom stall to check the number of likes on their latest profile picture.

So until a clear picture evolves, dust off your Carrom board, and skills, and live a little bit offline. Remember the pitfalls of misusing Facebook and Twitter, and steer clear of questionable posts. ‘Coz all you want is to do some good work and be taken seriously. Getting fired over a silly tweet will only be SAD! BAD! And TERRIBLE!