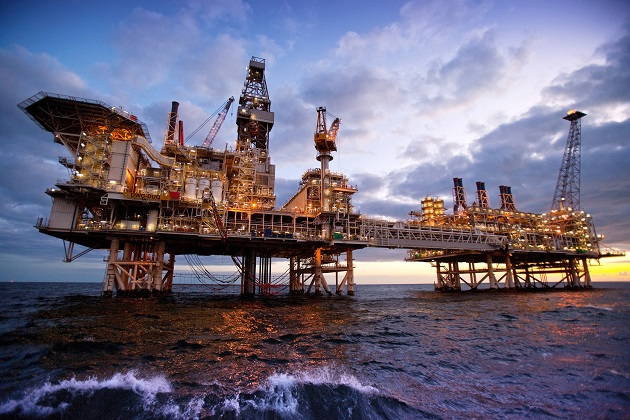 This is a guest post by Chandan Kumar Pathak, a Petroleum Engineering Graduate from Indian School of Mines, Dhanbad (now IIT Dhanbad); 1986 batch. He has spent more than 30 years in the E&P sector having worked in India and abroad. Currently, he is the Global Account Director of Weatherford International.

Jobs and Careers in the Upstream Sector (E&P Industry)

I would like to start with a small story about me leading to a career in E&P Industry. But hey, don’t brand me as a narcissistic yet. There is a purpose behind it.

How I became a Petroleum Engineer (not by choice)

I was born and raised in the scenic North East India, in the city of Guwahati in Assam. Mine was an amazing childhood spent in the lap of unspoilt nature. The hills and the rivers, the rains and the thunders and a soothing feeling from the greenery all around – they were my childhood chums.

From my primary school days, I wanted to become a doctor and I was quite focused on it. I dreamt of going to the poor villages and treat the needy – sounds a bit idealistic but that is what I had seriously dreamt of. During my higher secondary education in New Delhi, I had even resisted my father a lot who wanted me to become an engineer – his own unfulfilled dream. Subsequently, he gave in to my wish but queer fate had other plans.

Due to my good score in the HSC examination, I had qualified to get admission in the Petroleum Engineering branch at Indian School of Mines (now IIT Dhanbad) as the Assam Government nominee. The nominee was selected on the basis of highest PCM % (Physics, Chemistry and Mathematics).

The elders from our family advised that it was a much better choice rather than waiting one more year to appear for the medical entrance examination as there was a risk involved –what if I would not get admission in a reputed medical college?But I knew nothing about Petroleum Engineering and my sole dream always was to become a doctor. But I saw the sense in the advice and with a heavy heart, I decided to join the course.

Before that, I tried to gather some basic information about the course which was tough because ‘Google’ did not exist. All I could learn was – after doing this course one was 100% certain to get a job in Oil & Natural Gas Corporation Ltd. (ONGC), a government organisation.

After four fun-filled years in ISM, I became a graduate Petroleum Engineer passing the course with distinction. Thus, my case was not a well-planned career-oriented education but a curious turn of events led me to abandon my childhood dream and move on a path laid out by destiny.

There was an important learning for me which I strongly believe and try to follow.

Few things in our lives are destined to happen irrespective of whether we wish them or not. So when we stand at such crossroads, we should follow the guided path, not resist. End results are always going to be good in some way or other.

Thirty long and eventful years so far. Started off with ONGC, worked for 9-1/2 years. Monotony tortured me so I moved to Reliance seeking bigger challenges. Money lured me after a while, so I went international with Baker Hughes. 13 enjoyable years in Singapore, Myanmar, India & Bangladesh. Gradually climbed to the position of Director-Operations in South West Asia geo-market.

With a reasonable bank balance, a massive load of stress and an ever increasing blood pressure I developed the much-dreaded mid-career syndrome. I quit and went on a semi-sabbatical, part-time consulting and the rest of time either roamed in the Himalayas encountering near-death experiences or did some social work through my NGO to promote rural education.

After 2-1/2 years I had rejuvenated fully and also had two important realisations,(1)contrary to my earlier belief, my bank balance was not a sufficient insurance for the rest of my life and the responsibilities (2) too much of free time also creates stress.

So I jumped back into the rat race, it has been 4 years since then and I am still going strong. Life taught me another serious lesson – it is important to remain engaged with life rather than give up meekly and run away.

(However, now I am taking care of a child who I had totally neglected earlier. Sounds eerie? Not really.)

What is this E&P Sector:

Here we will discuss primarily the Upstream sector or commonly known as the E&P sector (Exploration & Production Sector) where I have been engaged. This sector is all about the search for elusive crude oil and natural gas which lie trapped miles beneath the earth surface. Once found, wells are drilled to produce these oil and gas together called hydrocarbon, to the surface and then processed to delivery or sell to the downstream sector for refining.

E&P sector is quite heavy equipment intensive with lots of high-end technology applications as well. The operations are challenging, physically demanding in certain aspects and generally in difficult areas like the deep sea or the remote jungles. There is some amount of hereditary glamour and machoism associated with the E&P sector due to these factors.

A general organisation structure is very similar to other industries in terms of support services like HR, Finance etc. However, the core department i.e. Operations is specific to oil field operations. In fact, this is where the organisation structures of an E&P Company and a Service Provider also defer.

I am sure you are curious to know how oil and gas buried and stored thousands of feet beneath the surface of the earth are located by oilfield experts. This is where the geoscientist has his major role.

After such oil and gas reserves are located, it is time for the drilling team to drill wells to get these ready to produce oil and gas.

Once the wells are drilled, these are handed over to the production engineers who produce from these wells for 10-15 years at a stretch through a maze of pipelines, production facility, monstrous offshore oil tankers etc.

This is where the activity of the Upstream or E&P sector gets over. The crude oil and natural gas are handed over to the refineries at the delivery points as mentioned above. The Downstream sector activates here and does all sort of refining activities to generate various by-products like petrol, diesel, kerosene, LPG, naphtha etc. for the consumer market.

I hope am able to help you a peek into the Upstream or E&P Sector in a simplified way without bantering with too many technical jargons. For those who are keen to learn more about this industry, I shall encourage you to read and watch more videos on the internet.

Career Options in the E&P Industry

This was one of the highest paying sectors globally till a decade and a half ago, thereby attracting a huge amount of talents. Other sectors have caught up of late but it still retains an enviable position in the top 15 worldwide.

Graduates from following engineering and science streams are commonly hired:

It is imperative for a young graduate to spend 8-10 years in the field to develop hands on experience and expertise which help in increasing the market value. The ones who prefer the comfort of office chair actually struggle with growth later on.

As regard to the jobs in support functions like Finance, HR, legal etc. they are same as other industries.

Why the E&P sector is attractive

But everything is not so rosy! Do expect a bumpy or should I say a roller coaster ride.

This industry is quite cyclic and the business yo-yo with the price of crude oil which again is governed by the demand-supply equation and the global economy as well as the global politics. Below is a graphical plot of crude oil price in USD for last 5 years.

One of the worst downturns in the history of this industry is being witnessed since mid-2014 when the oil price plummeted from more than USD 100 to a bottom of USD 29 per barrel. The industry is still reeling under the impact and yet to commence a recovery which hopefully will from the middle of 2017. 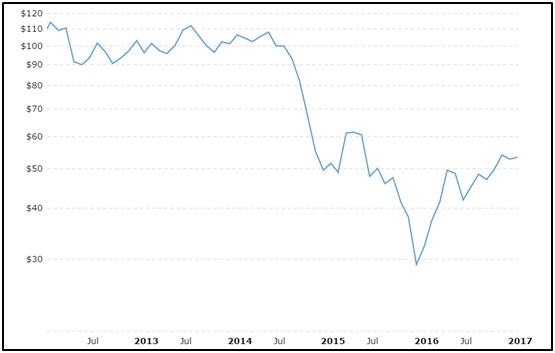 When the crude oil collapses, the profitability of the projects nosedives south. Result – shelving of future activities, a drastic reduction in manpower and across the board reduction of cost.

Since mid-2014, many of the big companies have released 25-35% of their workforce. Such has been the impact!

But once the turnaround takes place, then a complete frenzy catches up with everyone because then there is a rush to fast track everything. So things start shooting up north in terms of the job availability, good salary bargain in favour of the job seekers etc.

India is currently the fastest growing economy in the world, therefore you can imagine the demand for energy to fuel this crazy rate of growth. As far as energy consumption goes, it already stands a high 5th position globally. But shockingly, we produce only 20% of our total oil and gas requirement thus putting an excruciatingly painful burden on our exchequer having to import 80% annually.

Interestingly, only 18-20% of the country’s total area (including offshore) have been explored for hydrocarbon reserve so far. Since early 1990s the central governments have gradually opened up this sector for foreign investment and implemented a slew of good measures.

Currently the major players are ONGC, Oil India, Reliance Industries, Cairn India, GSPC and Shell India. There are several fringe players like Niko Resources, HOEC, BPRL, Geo Enpro etc. We expect the bigger international operators to come to India in the near future as the environment becomes more conducive for setting up business for them.

All the major international service providers like Schlumberger, Halliburton, Baker Hughes and Weatherford have been operating in India for decades. Small local companies have also come up but they have a long way to catch up with the big ones.

Considering the gaping distance between the demand and supply, the rapid growth of Indian economy and the initiatives being taken by the governments to further open up this sector, E&P industry in India has a very positive long-term outlook from employment perspective. Since it is an aspiration of many engineering students from premier institutes, the competition is also heating up rapidly with every major institute including the IITs are trying to woo the prospective employers.

E&P Industry is an exciting place to pursue a career. If you possess the basic attributes – hard working, sincere, honest and smart, this space is worth taking a plunge into.

And now you may feel like asking me as to what my own experience has been? In one single word – THRILLING! 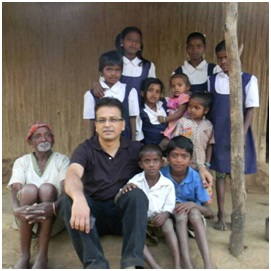 Chandan Kumar Pathak lives in Mumbai with his small family. Writing is his favourite pastime and has authored two books – ‘The Beckoning of Gyanganj’ (fiction) and ‘Footprints’ (short stories). The next, ‘A Leap into The Dark – for Love’ (fiction) is getting ready for publishing. Chandan is also a wanderlust and an avid photographer – makes his solo trips to the Himalayas or in the jungles or some remote villages in India. Check in his photographs at this link: | Photographs

38 thoughts on “Career options in the Upstream Sector: Exploration and Production (E&P) Industry”