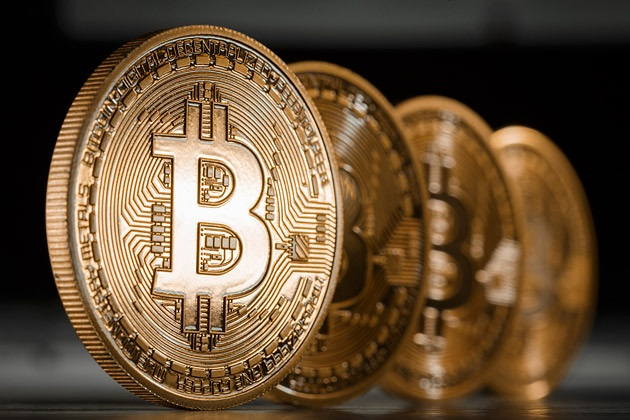 Have you heard about Bitcoin? And clueless as to what it is? Then read this primer to know all about Bitcoin – a currency revolution that is slowly taking over the internet transactions.

I have written this piece keeping my grandma in mind, so hopefully, you shouldn’t face too much difficulty in grasping it.

Bitcoin is a digital currency invented in 2009 by a Japanese programmer going by the pseudonym of Satoshi Nakamoto.

They are created (through a process called mining, read below) and held electronically in digital wallets, from where a user can send and receive bitcoins from others, and also pay for online purchases.

Bitcoin system is completely transparent, that is all the transactions records – past and present – are in public domain and maintained in a digital ledger (account book) called the “blockchain” in Bitcoin terminology.

It is independent of any central authority, for example, the RBI in India. In other words, RBI cannot manipulate the value of a single bitcoin. It makes bitcoin transactions near instantaneous as bitcoins are not tied to any one country’s or an international body’s regulations.

Second, there are no middle-institutions, such as banks, which can regulate the flow of bitcoins. As a result, there’s zero or very little transaction fee in some cases.

In short, Bitcoin is completely powered by its users, who also need not reveal their real identity while using it. Thus, bitcoins can be used to buy stuff anonymously.

How does Bitcoin work?

While a paper currency is printed by respective federal reserves based on the needs of their economies, bitcoins are generated by users through a process called mining.

Miners use advanced computational tools to discover new bitcoins by solving a complex mathematical problem tied to the Bitcoin system. Upon successful mining, a user is rewarded with a fixed number of bitcoins. These newly found bitcoins are then added to a digital ledger (blockchain) which keeps a track of all the bitcoins mined so far.

Since the Bitcoin ecosystem is completely user generated, anyone with an internet connection and the requisite hardware (advanced miners) can participate in the process and mine new bitcoins. The rewarding system acts as an incentive for people to discover new bitcoins.

However, the Bitcoin creators designed the system in such a manner that it progressively becomes more difficult to mine new bitcoins, eventually converging to 21 million. Beyond which, no further mining would be possible.

Can the finite number of bitcoins pose a problem in the future? Not really. Transactions can be denominated in sub-units of a bitcoin, such as bits. Each bitcoin further contains 1 million bits.

How the price of a bitcoin is determined?

The classic ‘Law of Demand and Supply’. With increasing demand for Bitcoin, its price increases. Moreover, as there are only a finite number of bitcoins and new bitcoins are being discovered at a decreasing rate, the price of each bitcoin is fast shooting up. This makes the Bitcoin market very volatile. Current exchange for a bitcoin is ~$1000. It was less than $500 a year back. Check the graph below: 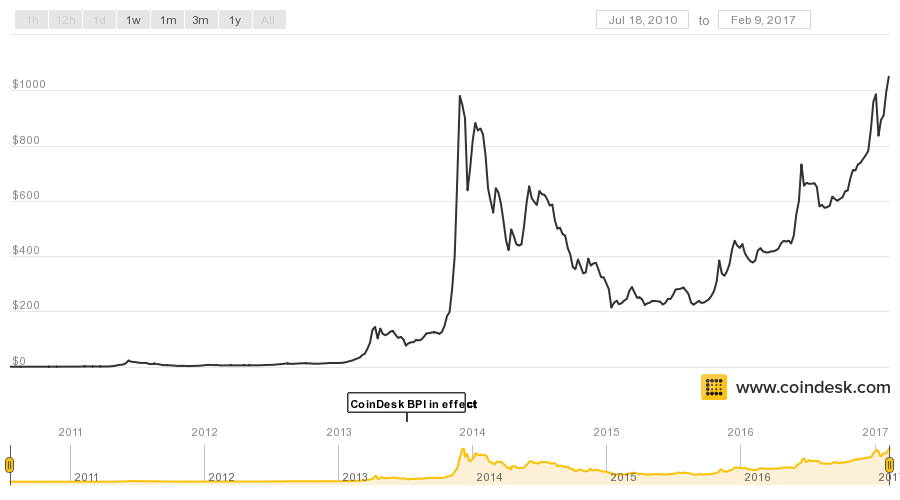 To begin with, they are as safe (or risky) as anything on the internet.

Digital wallets that store bitcoins for you are forever prone to cyber-attacks. While the Bitcoin creators continuously ensure the security of the system using advanced encryption techniques, there are equally talented people on the other side looking to hack into the billion $ digital island. Having said that, so far the system has proved to be robust.

Another thing – traditional currency has protective laws. If your bank goes belly-up or someone makes a fraudulent transaction using your credit card, there are laws and mechanisms in place to ensure some safety to the customer.

With Bitcoin, there is no similar safety net as yet. That is because there’s no controlling authority overlooking the entire framework.

Lastly, at an individual level, every user requires a personal key to access their bitcoins. If that key is lost or stolen, so are the bitcoins that open with it.

The legal status of Bitcoin varies across countries, where a few have allowed it fully, others have outrightly banned it.

In India, Bitcoin lies in a somewhat gray area. The RBI hasn’t explicitly acknowledged the use of bitcoins, nor has it outrightly rejected the idea. Legal experts claim bitcoin use per se, is legal in India. However, its use so far has been very limited.

Where to get bitcoins?

There are 3 ways to obtains bitcoins: buy at an exchange, accept them as payments or mine them yourself. Here’s a long list of bitcoin exchanges and digital wallets to hold bitcoins. [Note – the author takes no responsibility for the credibility of any of the names mentioned. It is strictly for reference only.]

Now that you have a basic idea about Bitcoin, the next logical question might be: should I invest in/buy bitcoins? The answer to this question in beyond the scope of this primer. It is a fiercely debated topic currently. The opinion on Bitcoin is divided into two camps: one that swears by the potential, robustness, and use of Bitcoin as the future of digital transactions, or there’s the other side which calls it nothing more than a Ponzi scheme whose creators and early adopters turned millionaires overnight.

About Nishant Rao
Nishant hold an MS from University of Michigan. When not designing structures, he is either reading, writing or learning some new skill on the Internet. A right-liberal with an opinion on everything.