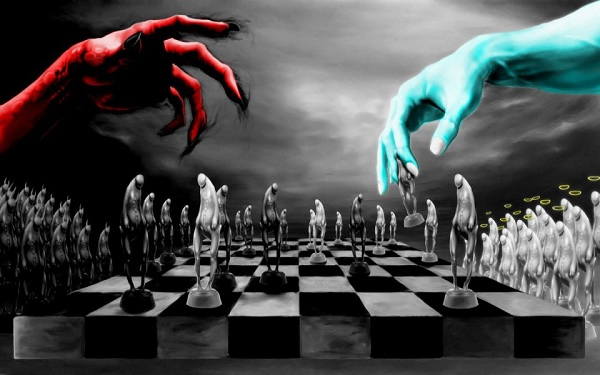 In a perfect world, you would be dancing your way to work with singing happy coworkers and even the bad guys would be nice enough to let themselves known with ominous make-up and scary attires.

Unfortunately, the actual world is nothing like it. You may be the same happy employee surrounded with singing birds and chirpy flowers, right out of a Disney flick, but the bad guy will not be wearing a ridiculous costume, surrounded by henchmen, yelling Hail Mogambo!

There might just be some among your very merry friends who will praise you, seemingly support you and even laugh at your jokes, all while covertly digging you a nice big hole to step into.

What makes these bad guys so dangerous is their ability to manipulate any situation to make you look bad and them shine like a freshly sharpened cleaver. These manipulators have nothing to lose and they can go all out in controlling your feelings. Hang out with them long enough and you’ll find yourself feeling like a worthless bum.

So who are these psychological manipulators? Is this a characteristic feature of narcissists, sociopaths or psychopaths? Are we bound to fall victim to the charms of such individuals or are there going to be ways we can identify certain traits in them? So let’s try to understand the common techniques manipulators employ to make every situation in your life favorable to his.

Here’s a list of the different types of psychological manipulation tactics that your boss and colleagues may be using on you.

12 Psychological manipulation tactics in your office (and life)

(I am going to turn you into my favorite poodle!)

A narcissistic manipulator needs to feed off the attention from everyone around. So, when you meet someone for the first time and find yourself immediately charming your new friend, beware! Such people often start off with giving you every compliment in the book to just hook you onto them. Once that is done, they can play you like Ronaldo.

While it is flattering to be that sensational, it is always better to stay grounded. A few tempting words might just be the perfect trap a manipulator may use to get you to do that humungous report he has been procrastinating on. And don’t think that you are going to get credit for it either. It will be all pain and less than no gain, you sweet sweet innocent thing!

I am sure you are just imagining it…

(I am going to turn your brain into Ramen!)

How often have you picked up on something negative a friend/coworker/relative from hell, had done and pointed it out to them only to be ridiculed? A classic narcissist/manipulator/psych(soci)opath relies in changing your reality by making you think that not only, what you said, never happened but that you are losing it.

Experience this long enough and you will slowly start doubting everything as your wild crazy imagination.

Have you ever asked yourself why I behave badly?…

(Watch how I make World War 2 your fault!)

Technically called projection, a narcissistic manipulator makes sure that his flaws are nothing but yours being projected on him. In a way the tactic is especially useful when a narcissist needs to explain away their bad deed by dumping the responsibility on your gullible shoulders.

As a cheating spouse may be heard saying, I am not cheating. It is your paranoia and clinginess that is running wild.

Or a government head might say, I could run this country better if it wasn’t for the unwillingness of the people to just stop questioning me.

Unlike physical abuse, blame-shifting or projection, causes the victim to be crippled with moral and emotional contrition. Such characters, at work, may hide their own inefficiencies or unproductivity and find a way to blame it on you. If you had given me a better project to handle, I would have done a better job. You are clearly not a good manager.

(A few more jabs and you will be the guy Hitler’s mom used to warn him about!)

A very well-known strategy for manipulative narcissists is to steer an argument or conversation to a completely different dimension, mostly polling towards something righteous or sensitive. The idea is to confuse or frustrate you by adopting some form of grandstanding opinion, wholly impertinent to the former discussion. This comes from a very insecure place in their mind. The very thought of a disagreement translates as a threat to their self-grandeur.

Traditionally such manipulative tactics have often been used by politicians to rile up the masses against any form of rational opposition. If you don’t agree with the current policies, you must not love your country!

Or…You are clearly a sexist if you don’t like the way she handles this project.

Your opinion doesn’t matter. You are too emotional…

(Only 5 more character attacks and you can be that pill popping loony no one listens to!)

In a lousy attempt to berate your opinion, a narcissist is more likely to label you something bad to help himself from thinking too hard and putting up a fight. With the popularity of social media, we now see online bullies coming out of the wood works and making tall general statements at their targets. Most of these statements have no rational basis and present no alternate perspective. They are simply used to minimize and belittle the point of their target. The tendency is to stay away from logic and keep everything covered up in haze.

Not only do you think I am wrong. You are convinced I am never right…

(Should I just stick to three bad labels for now? I mean he might come in handy next week!)

Narcissists often make an absurd extreme declaration to show everyone how biased you are. Motive? To simply highlight your unfairness. Let’s say a coworker is making crude jokes at the way you dress. You simply point it out to him. If he happens to be a narcissist, he will definitely make himself known with a counter attack. Are you seriously that sensitive?

So you think you can dance? Can you do math while dancing?

(Damn! He is so close to meeting expectations… Must destroy confidence!)

Nothing, you do, can be satisfactory to a narcissistic manipulator. Because if it does then you are not their punching bag anymore. And without you to feed their giant inflated ego, they will have to go through the tedious process of finding another minion. Here’s your typical narcissistic good-times-pooper!

Isn’t it hard to be still single?

Oh! When did you get married?

That long? And you don’t have any kids yet?

You do? Teenagers now? Nice…

Aren’t you worried that they will be young adults who will need to get married and settle down, with kids, soon?

You stayed up all night to do this analysis? I wish you had told me or I wouldn’t have spent 15min this morning completing it…

Toxic people like to put their victims down either by making cruel jokes or using sarcasm when they are totally unsuspecting of it. Done mostly in the presence of others, the idea is to appear cleverer while making you look like Daffy Duck. Though not necessarily only true for toxic people, this becomes a characteristic trait in narcissists when the one taking the shots does it without regards to how the one at the receiving end is feeling about it.

It’s a great plan, you have, and everyone’s talking about it. But are you sure this is what you want to show the boss?

(No one should know how good he is!)

Narcissists can act very slowly, taking all the time they want in first building up your trust in them, getting you to believe that they value everything in your life. Once that is achieved, they begin a process of slowly alienating you from everything you liked so as to have complete control over you. They will use false third party claims making someone else an accomplice in their Machiavellian plan to destroy you.

At work, you may find coworkers/bosses who, over a period of time, have stopped appreciating your talents and contribution, thus making you doubt everything you were once good at. Toxic bosses may tend to make you believe that you are probably better than some previous workers and slowly mete out abusive behavior at you.

10. Bait and then play victim

I don’t know why he is yelling. I only asked him about his monthly report…

Toxic people can play mind games that are too convoluted for a normal brain. They will provoke their target with sensational jabs and comments and then use their naturally antagonistic reactions to prove that their targets are irrational. They love baiting their targets into situations that show that they are the victims of abuse. In a workplace where impressions matter, your visible aggression is going to be viewed negatively. No one would really want to care about the events that led up to such an outburst.

I am sorry I called you an idiot the other day. But what can I say when you make a presentation like a gigantic moron!

If you think that you have overcome a manipulator’s attempts to demean you, watch out for an even worse retry. Manipulators love to be able to push your limits to test your final breaking point.

12. Covert and overt threats to exercise control

How dare you send your report directly to the boss? Didn’t I tell you to get everything verified by me?

This is the last resort for manipulators. They are generally quite clever in disguising their ways. However if you happen to be the one who is completely unfazed by everything else, they feel their control being threatened. They then switch to more native reactions such as threats and name calling.

Narcissistic, psychopathic, sociopathic, manipulative…well, let’s call them a collective evil sort people are present everywhere. They are the emotionally abusive spouses. They are the horrible politicians overcome with greed for power. They are the evil geniuses planning to overthrow Superman to take over his beloved foster home, the world. And they are the ones wishing you good morning everyday and walking over to the manager’s cube to tell him you are 2 minutes late, again!

They are everywhere and learning to recognize them is unfortunately a defense strategy needed to survive this dog-eat-dog world. Of course you can always try working with actual dogs instead. The only thing those guys can manipulate is their tail…if it wags left to right really fast, you are due for a raise!

Educate your near and dear ones, so they don’t fall prey to any of these psychological manipulation methods.