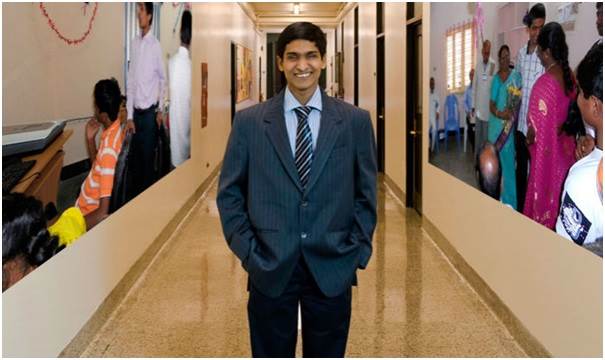 Because the ones crazy enough to think that they can change the world, are the ones who do. And we will take Steve Jobs’ word for it. Crazy is someone who parts the odds sea and makes her/his way through it, leading the way for countless many.

Meet Srikanth Bolla, a man who parted such a sea hell-full of odds, let loose not by the fact that he was born blind, but a society that has yet to open its eyes to human possibilities.

Our society has a tendency of measuring future potential with ones’ circumstances at birth. An actor’s child will be an actor, a politician’s son will be the future neta and these labels have worked, quite successfully for generations before us. So why wouldn’t one assume that a poor farmer’s son, from the usually drought stricken villages of Andhra, also grow up to be one? Having assumed that, one can only imagine how such a farmer, and his family, would have been chastised for giving their sightless son an attempt to a normal life. While fellow villagers were busy coming up with quick and painless suggestions to end the newborn’s life, Srikanth’s parents looked the other way and started making a plan to make him reach his farthest.

His school, for the able-bodied, was soon quite unable to accommodate his disability. Disappointed, his parents moved him to a special school in Hyderabad. While most of us spent our adolescence listening to Bryan Adams, Srikanth listened to audio books, prepared by his special educators, and went on to score all sorts of bright colors in his tenth boards.

Can any one of us ever say, in passing, that the most revered president of India, Dr. A.P.J.Abdul Kalam, has a fond anecdote about me? Well, Srikanth can!

Dr. Kalam, in a meeting with the tribal students of LeadIndia2020 movement, had asked them what they wanted to become when they grew up. A question, usually followed by doctor, engineer and responses as such, was shaken up with quite an unusual, yet bold, response. A student, in the ninth grade, said I want to be the 1st visually challenged President of India.

You would think, that with such high endorsements and high scores to back up his claims of perseverance, any school would be wanting to be a part of the history this boy was going to leave in his wake. But no…! The Andhra Board refused him admission to Science. Some wise guy, sitting on his government supplied throne, must have looked at his application and said, Yes yes all that Lead India thing is good and his tenth scores are also good. But how does that say that he is good enough for Science? And if you have not already been rooting for Team Bolla, his next tripping move might make a convert out of you. Srikanth heard what the Board had to say and turned around to sue them! After six months of courting, Srikanth was let his choice, with a disclaimer. Take Science at your own risk. As if they ever planning to hold his hand through the ordeal of high school.

As you might have guessed by now, Srikanth excelled in the 12th too. And as if history had gotten in the habit of repeating, very very frequently, he was denied a chance at the IITs as well.

Not to be one who breaks down under failure, he got a chance at Massachusetts Institute of Technology (MIT), with a scholarship, to major in Computer Science and Business Management (Sloan School of Management). And MIT wasn’t the only one to recognise his potential. He also got admits from Stanford, Berkeley, and Carnegie Mellon. Here’s to the most delicious vindication, served at the hands of the most deserving, to an entire system completely incapable of handling more than 2% of India’s disabled population.

Srikanth left the promises of Corporate America to return to India, with a mission to fill the gap left by this country’s inadequacy to meet the needs of the needy. Encouraged by his tutors and peers at MIT, and with the immense help of one of his special education teachers, Swarnalatha, founded Samanvai, a non-profit organization aimed at helping disabled students to reach their goals. With aids like training and Braille digital libraries, Samanvai has been helping thousands of students since 2012.

He didn’t want to stop yet. The next question he wanted to address was how to increase job opportunities for the disabled. In 2012, Srikanth started Bollant Industries Pvt. Ltd. which staffs a majority of differently-abled and/or financially challenged workers, with five plants in Karnataka and Telangana, one of which he aims at being completely solar powered. The company manufactures eco-friendly, disposable consumer packaging solutions with areca leaf and re-cycled paper. With annual sales going beyond Rs. 70 million, he is even exporting his products to Australia, US and Germany.

His vision has managed to attract angel investor Ravi Mantha, who has taken Srikanth under his mentorship and with big name investors like Ratan Tata, Satish Reddy of Dr. Reddy’s Laboratories and Srini Raju of Peepul Capital, Bollant Industries Pvt Ltd valued at over 50 crore is well on its way to becoming an IPO.

Srikanth Bolla, the CEO of Bollant Industries Pvt Ltd, is a visionary with compassion, one who has been heard saying, “Compassion is a way of showing someone to live; to give someone an opportunity to thrive and make them rich. Richness does not come from money, it comes from happiness.”

And he might just be crazy enough to change the world, one differently abled life at a time.