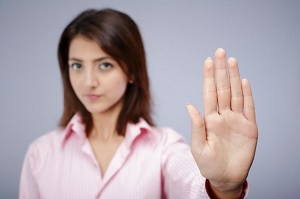 As women at some point of our career life we have been exposed to misogyny, sexism, workplace bullying or even harassment by male superiors. Newspaper headlines have become common these days where women become victims of recriminations from their alleged sexual abusers, stating that the woman who claims to be harassed or inappropriately touched is lying to tarnish the image of the abuser.

Sometimes we also hear some of the male counterparts resorting to blame game when they are caught ogling at a woman’s dress. For them a woman is responsible for attracting unnecessary attention but owing up to their guilt seems a far sighted dream.

I am not saying that this is the case with all male employees as there are many good male superiors who give space as well as the right platform for their women colleagues to grow.

The purpose of this article is not to paint our male colleagues or even men folk in general in a negative manner but to educate all working women not to panic in such situations or worst to accept everything mutely. Silence can never be the answer or solution to wrong deeds and there are ways to handle and overcome this situation.

Workplace harassment faced by women and how to deal with it.

Bullying or harassment? Understand the workplace harassment laws in India.

There is a difference between bullying and harassment and the phenomenon is not country specific but universal. Workplace bullying is gender agnostic and can be perpetrated by both male and even a female boss.

It is not incident specific because bullying is persistent which affects the emotional, psychological and mental health of the victim. It can start off with individual bullying and can lead up to serial bullying which can go on for years and can involve inter departmental teams to create a situation where the employee has no other option but to leave the organization.

Other facets involve client bullying, cyber bullying, non-cooperation, name–calling, and harboring deep seated resentment due to various reasons like linguistic and cultural difference or even the victim being more talented and capable than others.

Unfortunately there is no law to address workplace bullying as bullying is very difficult to define and quantify because it rarely crosses the zone of obvious or overt ways such as physical abuses or lewd gestures.

Workplace harassment definition: Regarding harassment faced by women, the following unwelcome behavior or sexual gesture comes under the definition of sexual harassment as defined by the Supreme Court of India:

The scope of this law not only covers government bodies, private and public sector organizations but also non- governmental organization and even places that an employee needs to visit for official purpose which means transportation provided by the employer for commutation purpose also comes under the ambit of this law.

This law came into effect after the Supreme Court of India, in its landmark judgment in Vishaka and others v. State of Rajasthan (“Vishaka Judgement“) acknowledged sexual harassment at the workplace as a human rights violation. Vishaka , a non- governmental organization,  filed a petition  when Bhanwari Devi a social worker in Rajasthan was brutally gang raped by  some upper caste men when she tried to prevent a child marriage , part of her work profile as she worked in Women’s Development Project Rajasthan , and faced injustice by the trial court when all accused were acquitted.

In spite of a strong law and increased awareness about women rights post 2012 Delhi gang rape case, around 70% women do not report sexual harassment case by their superiors as per a survey conducted by the Indian Bar Association in 2017. A research study conducted by the Federation of Indian Chamber of Commerce and Industry (FICCI) in 2015 showed that 36% of Indian companies and 25% of multinational companies do not have an internal complaints committee (ICC) which is mandatory for every private or public organization that has 10 or more employees as per the Sexual Harassment Act, 2013. Even worse the research study found out that even if some of the companies had an internal grievance committee, the ICC members were not legally trained or even sensitive to deal with such issues.  Another study conducted by Ernst and Young in 2015 stated that 40% of IT and 50 % of advertisement and media companies did not even know that the law demanded setting up of ICC. To summarize for most organizations, training session on women safety and workplace harassment is just another tick box in HR training checklist.

Women generally resort to silence because endurance seems a less bitter medicine for them to taste. At the end taking a step would mean not only jeopardizing their relationship with their superior but even could pose a threat to their employment. Being a victim myself, I was not surprised why my zonal head, who was investigating my written complaint against my HR manager, asked me not to discuss this matter with anyone including my family members and indirectly hinted that if I do not comply to his words then I should be prepared to be transferred to some obscure place of India. I had to master my courage to remind him that not only was he willfully sabotaging my fundamental right of speech but also a demotion or reassignment of duties could count as retaliation under the law and that stopped him from threatening me.

Lack of support from colleagues and even women colleagues during legal proceedings is also one of the reasons why women step back from choosing the path of our long and frustrating judicial process. Legal cases become public records and can be available for anyone who is interested to read it which can create more hurdles for future employers to hire them because no one wants to hire someone who sued somebody. It is an irony that sometimes these same women colleagues resort to slut- shaming the victim just to earn some brownie points or be in good books with the management. Last but not the least due to lack of information or even awareness of laws makes it difficult for women to report such cases as they don’t know where to go to report them.  Even if she figures out where to report for example in the HR department then this issue becomes the talk of the town which actually should have been dealt in a confidential manner.

How to tackle workplace harassment

I am not an expert in this field but after experiencing this episode, these are the lessons that I learnt and some tips to meander your way with dexterity to rise up bravely for yourself.

Your body language will set the boundaries for his interaction with you and if he still does not understand it then you can either disclose this to a more mature senior who can arrange a face to face meeting with your harasser to diffuse the matter. If things still don’t solve then you need to make a formal complaint.

You taking back your complaint would not only weaken your image as an escapist but also boost up the ego of the perpetrator and will give a green signal to him to try on other women also.

To conclude workplace harassment that women face is not a recent phenomenon as it has existed since centuries.

Many women choose the convenient and comfortable path of compromising and fret a lot about consequences whereas very few who feel that their self respect is a non negotiable entity stand up against it. Be happy that you come in that elite list of very few women who speak up.

Playing the victim’s card can never help and in this process if you lose out a good chunk of your office friends and attract more scornful looks then it is absolutely fine because one should remember what Winston Churchill once said about having enemies:

You have enemies? Good. That means you’ve stood up for something, sometime in your life.

About Yasmeen Hossain
Yasmeen Hossain left her banking job to become a school teacher. She shares her experiences, knowledge and views on the Indian education sector.