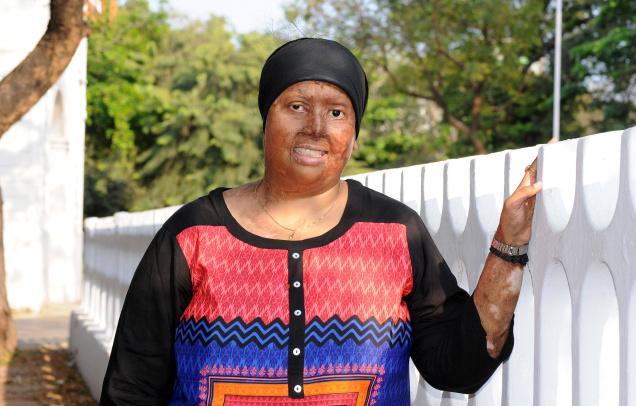 Statistics of acid attack cases in India show that the crime is on the rise. From 106 cases reported in 2012, the number shot up to over 500 in 2015. And this doesn’t even take into consideration all the cases that went unreported.


Like these statistics, what the bone-chilling before and after pictures of acid victims don’t really bring to surface is the horrifying realities of the crime and the utter helplessness that the survivor has to go through years after the incident. While the wheels of justice turn at a very slow pace, effectively punishing the victim more than the perpetrator, the medical and legal expenses can have a debilitating effect on the victim’s entire family.

Why are there so many acid attacks in India? What happens to the skin during and after the attack? How long does it take to heal? How much is the medical cost for reconstructive surgery? What initiatives can the government and citizens take up to curb it?

To get answers to these questions, we reached out to Pragya Singh who runs Atijeevan, an NGO that recruits survivors and helps them become financially independent.

Careerizma: Can you share a little about your growing up years?

Pragya: I was always an introvert person till the unfortunate incident happened to me and I realised I need to speak up for myself and my closed ones. As a student I was shy and someone who used to speak very less, but I loved dancing and always tried to participate in programs which gave me an opportunity to dance.

Careerizma: What were your career aspirations? Which job did you get after completing your MBA?

Pragya: I was very ambitious and had many plans for my life and career. I pursued MBA in Apparel Management and was about to attend my campus placement when the unfortunate incident changed my life forever.

Careerizma: Can you share more about the incident that changed everything? Did people around who witnessed it come forward to help?

Pragya: While traveling to Delhi in Train to attend my Campus placement I was attacked with acid on 30th April at 2am. I never heard of this kind of attack, takes place and that it cud happen to me.

I shouted for help as my whole body was burning in flames. Even the co passengers couldn’t understand how to help me as I was crying in pain.

Luckily there was a doctor in the next coach, who after hearing my scream came and told that it’s an acid attack and asked the passengers to keep putting water on me so that the acid could get rinsed away.

Careerizma: What went through your mind about what to do next?

Pragya: I was unconscious for two days, when I opened my eyes I was in ICU with my family around me. I was not in a state to think what to do next. Rather I had many questions in my head for which I needed answers…..WHY ME?
The only thing I had in my mind to do next after the attack was to get well soon and start my career and family life.

Careerizma: What challenges did you face after that on the medical and legal front? Were the authorities cooperative, was the process efficient?

Pragya: Life was full of challenges after that. First to recover from my initial wound, I was in the Burn ward in Delhi for more than three months and got discharged only to go to another hospital in Chennai for my eye surgery.

During that time my parents had to undergo the legal drama and court hearings along with my on-going surgeries in Chennai. My parents were made to run from pillar to post for documents in each legal proceeding.

If the authorities would have been helpful we would have gone justice immediately and would not have to wait and run for two and half years to get the accused jailed for mere 4 and half years.

Careerizma: What were the toughest aspects of getting your life back on track?

Pragya: Social stigma and never ending surgery. The moment I recover from my surgery my Doctor would suggest for the next one. This happened for two years until I realised and decided to stop expecting that I could ever have a close–to–normal face and I should now move on in my life.

Careerizma: The most common reason behind acid attacks in India is spurned suitors looking for vengeance. Does it happen because they think it’s easy to get away with it? Aren’t the laws in India strong enough to deter them?

Pragya: Acid is more dangerous than a weapon and the cheapest one. You get a bottle for a mere 20 Rupees (INR). It’s the easiest way to destroy some one’s life completely, yet get away without being punished stringently.

Careerizma: How can such incidents be reduced, if not completely eliminated?

Pragya: Gender discrimination is the core/major reason for these attacks, I believe. In our society a man cannot accept rejection from his opposite gender, he thinks he owns a woman if he loves her. He thinks a woman has no right to reject him or select someone of her choice. That makes him take steps like attacking a woman with acid.

Needless to say a carpet ban on acid in retail market and selling only with authorised dealers with proper identity proof will deter acid attack to the minimum.

Careerizma: Apart from the physical pain, how do survivors deal with the emotional and psychological scars?

Pragya: Many who read about stories of acid attack do not realise how horrific the crime is. It damages more than the victim’s body. It rips her apart from the inside too.

The physical trauma is intense because it is a 3rd/4th degree burn in many cases. That means it can burn through the deeper laters of the skin and also reach the bone in some attacks. This makes the recovery process very long and painful. And it almost invariably ends up leaving scars and disfigurement.

During the healing period which can run into months or even years, the open skin is highly sensitive to external stimulus such as direct sun, lack of moisture in the air, and even proximity to fire. When the skin has been burnt, the pores get shut. Due to this the survivor cannot sweat and cool the body.

The acid attack can also result in other deformities – to the eyes, ears, and other vital organs. These can end up as life long disabilities.

Careerizma: What positive initiatives do you hope to see in India that’ll tackle the issue?

Pragya: 1) Creating awareness about the first aid and better treatment. There are several no surgical ways to reduce the appearance of the scars.

2) Opening skin bank in every state and gradually starting it in every district hospital. Creating awareness about the same to donate skin as it reduces the chances of Infection and increses the recovery of Burn wounds.

3) Rehabilitation – Working on the ways for the Livelihood of acid attack survivors. Funding Business of the survivors.

Careerizma: When did you start Atijeevan Foundation and why? How big is the team now and what backgrounds do the team members come from?

Pragya: Atijeevan was started in 2013. We have more than 130 Volunteers working with us Pan India. Each team member at Atijeevan is very deeply involved in this cause and does the work voluntarily (they are employed as professionals in the corporate world and they only get reimbursement for the money they spend for the treatment). We have team members from different professional backgrounds like fashion, finance, law, software, research, teacher, social sector and doctors.

Careerizma: How many acid attack survivors have you helped over the years? In what way?

Pragya: We have helped more than 120 acid attack survivors over the years in several ways.

Careerizma: How much does it cost on an average for reconstructive surgery? How long does it take?

Pragya: The amount is in lakhs of Rupees. Though we have tie-ups with several hospitals in the country and they give us concessions. But an average one surgery cost us around 40,000. One survivor needs multiple surgeries.

Careerizma: Are there 1-2 incidents that stay fresh in your memory (e.g. for the grit/determination that the survivors have shown?)

Pragya: There are several stories to tell, but Deepmala’s will always be near to my heart. She is the first patient whose vision we were able to restore a bit.

Careerizma: What kind of support from others (companies/individuals) would help the cause? Financially or otherwise?

Pragya: We need more volunteers to create awareness and teach our girls. We also need volunteers for several projects we run and requirement we have city wise. We are in need of Lawyers in several city to help survivors in legal matters.

Financial help for surgeries / Rehabilitation / workshop / funding business of survivors / Funding for education would be an icing on the cake !

Careerizma: How can readers interested in volunteering get in touch with your team?

Pragya: We have Facebook/Whatsapp group for volunteers and we post requirement city wise. They can join, stay updated and help us.

About Sameer Kamat
Sameer is the founder of Careerizma and the author of two best-selling books. He's been quoted in the leading international media publications such as Fortune, Forbes, Financial Times. The Times of India, Indian Express and many more.